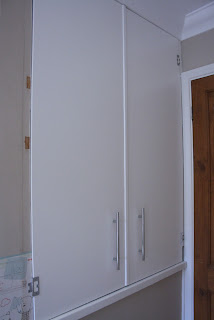 Huzzah!! The nursery cupboard/closet/wardrobe storage has finally been made over. Behind those doors lies a far more organised and space-efficient, erm, space. The only thing left to do is touch up the bits where the hinges for the old doors were. 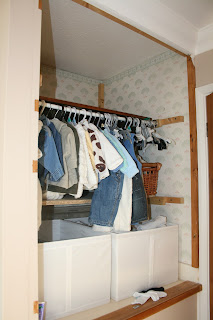 The louvre doors had been taken off by this point, but they were an awful shade of orange-brown the same as the trim seen here. Couldn't wait to get my tin 'o' white out!

So what was wrong with this space? Where do I start?!
1. It was dirty looking.
2. Not enough shelving.
3. Existing shelves stuck out too far and interfered with anything hanging on the rail.
4. The rail was dirty.
5. Wood parts were cakky orange-brown stained.
6. Doors were the same cakky orange.

So, the first thing we did was take out all of the shelving and reposition making better use of the space. We also added an extra shelf. All the shelves were cut down to a shallower depth, using the containers I am using as drawers as a guide. This left much more space in front for hanging clothes, which now hang on a shiny new chrome rail.

I painted the walls and ceiling with white emulsion and the wood parts with white eggshell. My husband made an excellent job of the doors I think and they look much cleaner and modern than the old louvre doors did. If I can find a photo of the old doors I'll post one later.

Once I'd battled through this pile of all his clothing and other wardrobe fillers...

I was ready to put things back in a more orderly fashion. 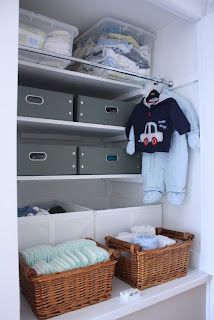 I also have a little (lot) more storage in the form of my trusty IKEA Expedit 2x2 unit. 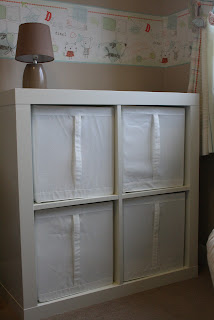 The boxes inside are "Skubb" and hold so much stuff it's unreal. We use them in the kid's toy storage Expedits downstairs too.

Top left we have sleepsuits, rompers, and vests. 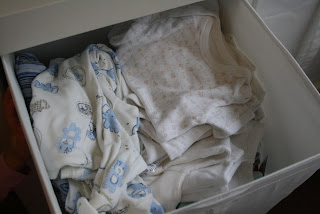 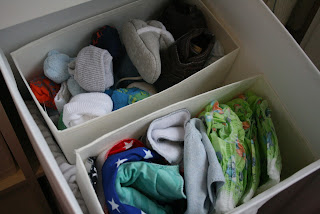 Now, because the Skubb boxes are so deep I've used the Skubb drawer dividers inside here to help layer up. Here's what I mean. Take one out and you can see his sleeping bags stored underneath. 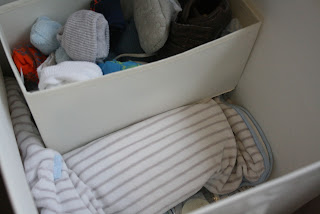 The bottom right is trousers. 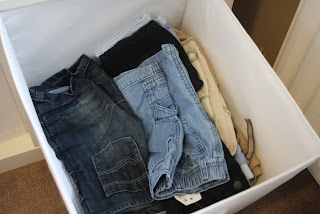 And the bottom left is another Skubb drawer divider holding his tops with knitwear and fitted sheets underneath. 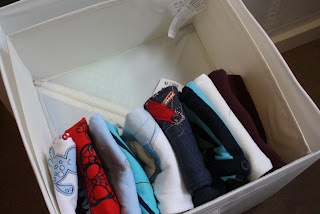 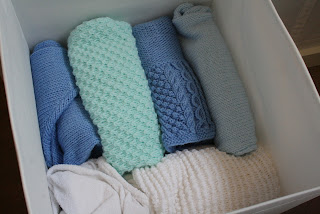 Let's take another look at my his fab new cupboard... 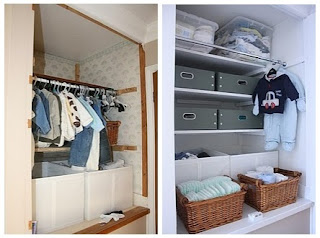 I'm so proud! :o) Now I just need to put the rest of his hanging items up and we're done. Here's what's in there,

Top left - plastic box containing cloth nappy equipment not currently in use (spare inserts, too girly/big, etc.)
Top right - a plastic container with clothes that are too big right now.
Middle shelves - Green containers on sale for £1.49 each at Dunelm Mill. Clockwise from top left they house: nothing / empty (yey!), spare hangers, stock of baby wipes, spare nursery wallpaper borders.
Bottom shelf - 2 massive Skubb (recurring theme here?) containers with all the clothes that he no longer fits into, which I intend to go through and put on eBay. Sob!
Front - two out of three baskets I've had for ages. Nappies on the left, baby towels on the right.