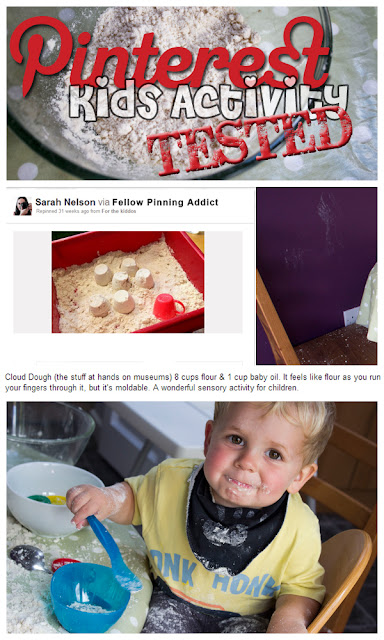 So, anyone with Pinterest fetish - like me - will have tons of things they have pinned and fully intend to actually DO later. I have zillions. There are some really cool looking kids activities on there and I gave up pinning them a while ago because I already had so many that I hadn't attempted yet.

One that stuck in my mind (mainly because I already had an out of date bag of flour and some baby oil) was the "Cloud Dough" one. Apparently, this cloud dough is meant to be, "A wonderful sensory activity for children." 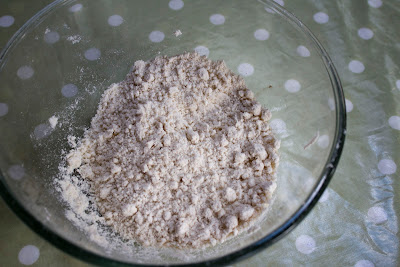 I made the executive decision to mix the ingredients myself. You never know how these things are going to turn out and I didn't want the kids to feel an invested interest at the point before I have to tell them it's a sticky mess that needs to be thrown away. I could imagine their heartbroken faces. 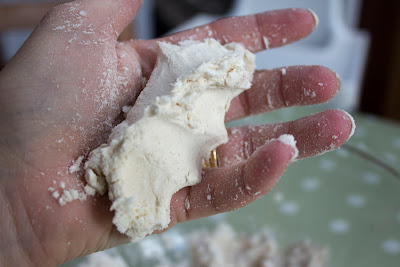 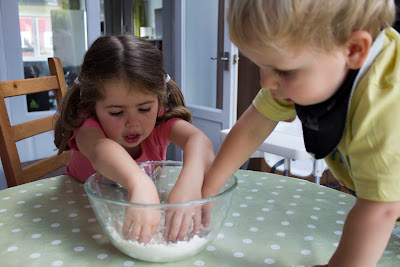 When the kids play I basically just leave them to it. I gave up trying to get them to play in a controlled manner a long time ago. They are happiest when left to their own devices with me working on my own little bit of the activity alongside them. 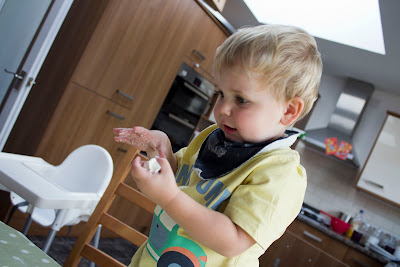 I think they enjoyed it. I built a few walls and made a few cup "sandcastles" but to be honest, it has its limits. 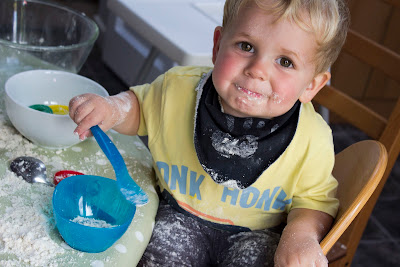 Youngest ate it. Let's face it, the kid eats anything. He sits on a beach chowing down on sand like he's at an all you can eat breakfast buffet. So flour and baby oil? Gourmet! 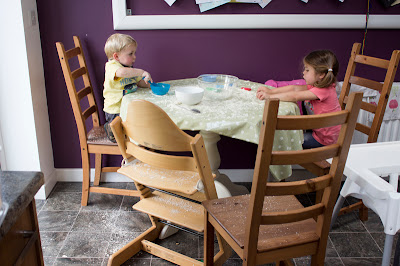 Basically, the middle item is a gauge of enjoyment. The longer the kids play, I figure the more they are enjoying themselves. The other two have to balance with this to make it worth it. 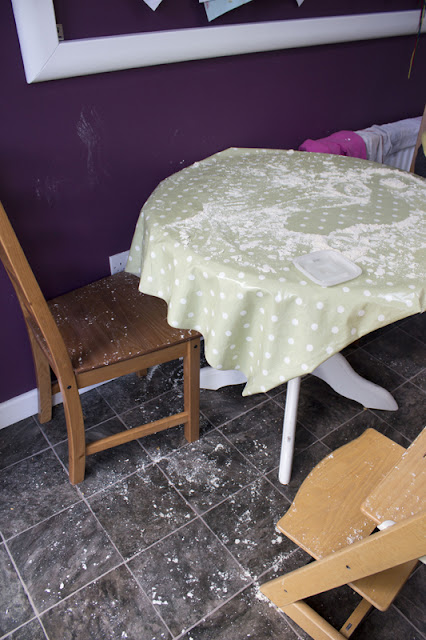 Well, let's just say that things didn't quite balance out right for this Pinterest activity. It took me about 5 minutes to set it up. Not bad. The kids played for 15 minutes. Hmmm, not so great. Especially when you consider that they had started getting bored by around the 7-minute mark. It didn't take long for them to spread out the mess. You can tell when boredom sets in by the way they begin to push the boundaries of what they know to be the proper, acceptable way to play with the toy or activity. 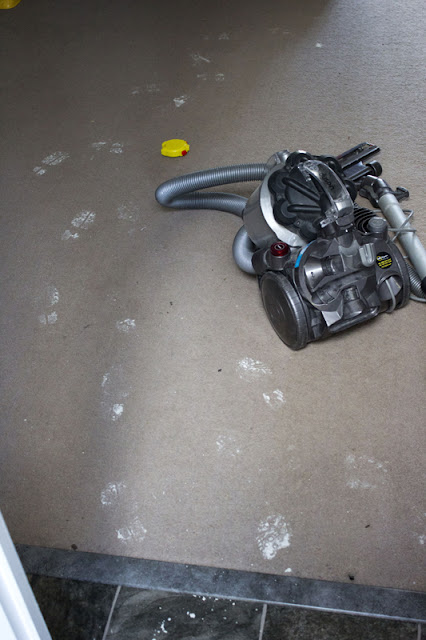 By 15 minutes they had given up on it and wandered into the living room leaving a white trail of cloud dough footprints (which are considerably less fluffy than the name suggests). They asked me to put the TV on.

It took me 30 minutes to sweep up and wipe down afterwards. It was all over the kids' faces, clothes, the floor, the walls, chairs, table, living room carpet... And in case you're thinking, "Hey, look she put down the hoover and staged a photo with it next to the footprints!" No. Our hoover actually lives right there. In the living room. I hoover that often - through actual necessity - that the hoover remains within easy reach at all times.

Let's do the maths... 5 minutes set up plus 30 minutes clearing up = 35 minutes of non-fun mummy prep and tidy time next to the 15 minutes of actual playtime. Hmmmm.... I don't think we will be doing this one again until the summer. Then they can do it outside. But, then again. I think I will just get them a bag of sand.
Posted by Sarah Nello at 13:25 2 fabulous readers left a comment