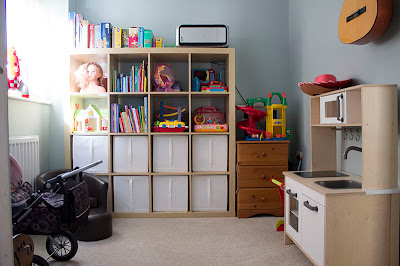 Okay dokay, so I said I've been busy and I mean it! I have been none stop doing since the new year and it feels amazing! There are a ton of things I want to share with you, but I actually got to take some photos of the toy storage situation today before the kids wrecked it all again. :) It doesn't stay tidy for long!

This space is the toy room slash playroom. Usually, the kids drag out their toys to play in the living room, which is fine by me. I just think it's wonderful having a room where all their toys can be tidied and hidden away. I am certain this room will evolve as they grow up, but for now, it has everything they need.

There are some ah-mazing playrooms out there in the blogosphere and on Pinterest and I will admit I feel envious at how much space some people have in their homes to allocate to a play area. There are also some truly innovative and clever little design features, which I would love to incorporate somewhere, but my kids are a bit young yet I think, and we don't have room. 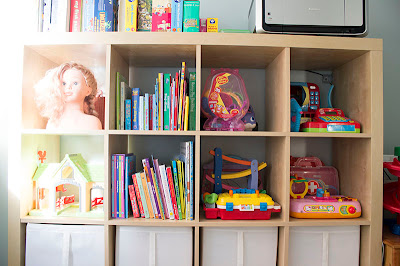 Anyway, one of my invaluable Expedit shelving units lives in this playroom. It used to house all of my crafting gear, but that has since been relegated to the big unit in the living room. I cannot praise these ingeniously simple pieces of furniture enough! I just love them! The cubby holes are a great size for storing toys as they're wide enough to sit things on and big enough to store the kids' books - why are they sometimes so massive?! The Skubb boxes corral all of the bitty bits... 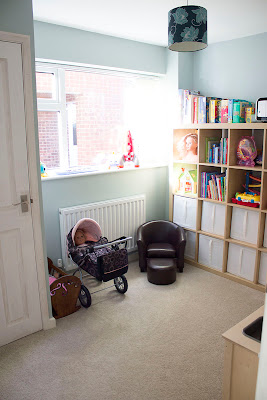 On top is where I stash the things I don't want emptying all over and jumbling up - jigsaws and games mainly. If they were within reach there would be a puzzle soup to sort out every day, several times a day. :: shudder ::

Oh, and my printer is on top there too. Nowhere else to put that thing! 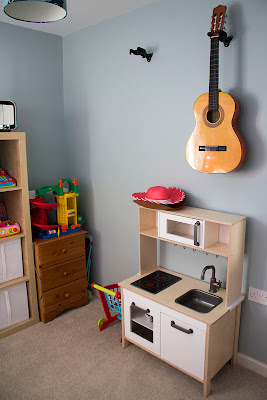 That's the kid's guitar on the wall. It only has three strings, but the way they hammer it I am wary of adding any more right now! I found it in a charity shop for £5 so it was a real bargain! My husband's guitars used to reside here before they were usurped in favour of morekidsthings. Story of our lives eh! :)

Can I also just say that i LOVE this play kitchen from Ikea. I know, I know I am all about Ikea again, but it's just awesome! Sooooo many play kitchens are bright pink, which is not ideal if you have children of both genders (although my son does have a lot of pink in his life). And some are just gaudy and nasty looking. This is perfect! It's simple and more like the real thing, which is of course what kids want - to be just like mummy and daddy. 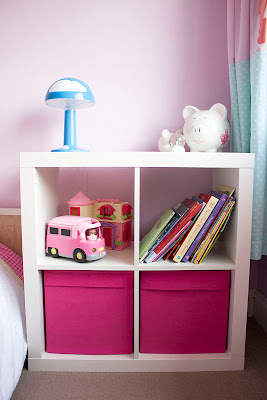 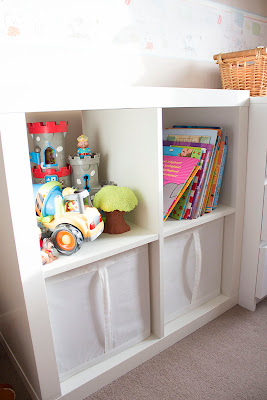 While I'm banging on about how I have organised the toys I'll show you the two baby Expedits in their rooms. My daughters are top and my sons are on the bottom. Couldn't be without them! 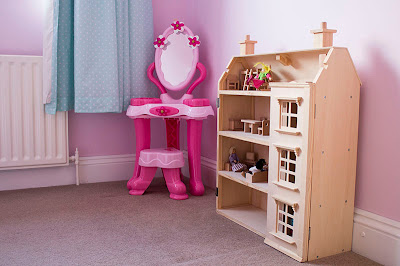 My daughter's room is actually a good size, so she has the space to keep additional things, like her dressing table and her dolls' house. My son's room is the third boxroom bedroom, so it's pretty small. Once he gets big enough we will get him some sort of cabin bed type of solution. 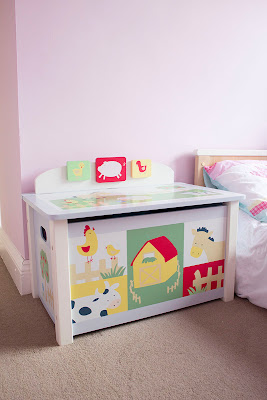 Last but not least, here's the toy box. It currently holds all the millions of teddies they have accumulated, but I am considering bringing it downstairs and using it to keep their dressing up clothes in. I'm undecided.

I hope you've enjoyed being nosy at my toy organising solutions. I have, as always, enjoyed sharing these ideas with you. I know these solutions are not as design-savvy or as clever as some of the things I have seen on the interwebz, but they work for us and they work well. At least for now anyway. You know how it is with organising - it's an ongoing process!

(You might have noticed you got a sneaky of dearest daughter's new bedroom. I've got a few finishing touches to do before I am ready to show you in yet, but I am excited! I love this room!)
Posted by Sarah Nello at 21:10