My Bunch of Keys

It's a silly little thing, but one with a decent enough impact. My bunch of keys was getting stupidly big. Each time I got a new key I would simply add it to the bunch with little regard for what was already there. I had too many keyrings, too many of those metal ring doodads and duplicates of keys where I only needed one. 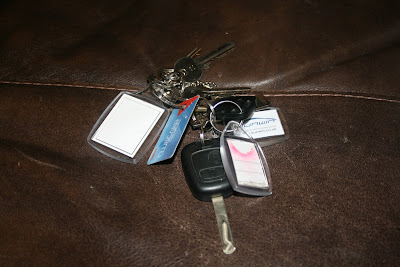 So, I sat down for 5 minutes and took the whole thing apart to rebuild it. Now I just have the essentials - one front door key, one back door key, one key that is for something I've forgotten about and need to track. One keyring with my daughter's bounty photo in, my Clubcard barcode and a key club keyring for if I lose them. Job's a good un! 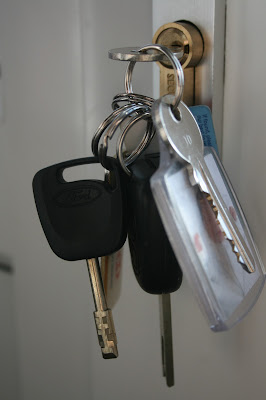 What's that you say? "My word what a difference! What once was a mightily shoddy bunch of keys is now a shining example of lock opening implement organisation!"

Okay, so I know that doesn't really make up for a week of silence, but truth be told I have been very busy with my decluttering! I am on with my daughter's drawers and working through filtering out all her too-small clothes. Our baby boy's nursery is almost finished and I will be ready to share a photo of that soon, followed a couple of weeks later by the gorgeously new tidy wardrobe/cupboard in his room. Oh, it's all going on!
Posted by Sarah Nello at 20:57