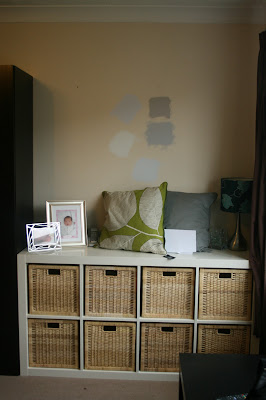 We are going to be decorating our living/playroom in the next couple of weeks. In fact, the only thing stopping us right now is my indecision over paint colours. I do know (possibly) that I want to do the wall with the double doors leading to the kitchen in white. That's because it's dark down that end, so I could use some light-reflecting action going on down there. I'll then match the small strip of wall that faces the same direction in white too for some continuity.

After that... I don't know!! I initially wanted to do the walls a pearl grey colour, which is the middle right sample on the photo below. Then I thought maybe taupe, which is the top right sample. Then I panicked about it being too dark and got the rest of the paint samples you can see and didn't like any of them. This is so hard!! 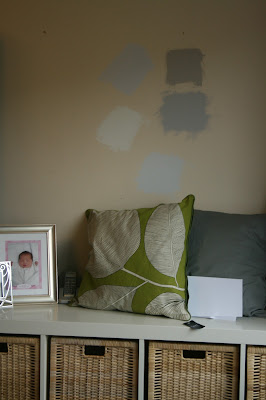 I know this isn't exactly organising, but it's "homey" so here I am. Anyone have a preference on colour? Or even an alternative idea?

Here's the room as it is now. 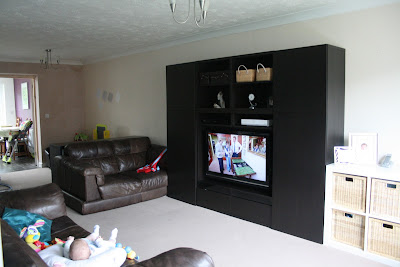 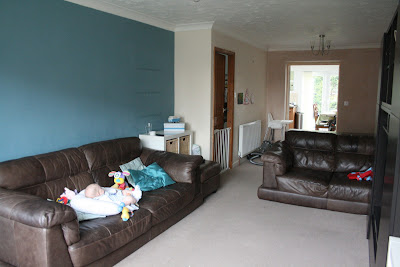 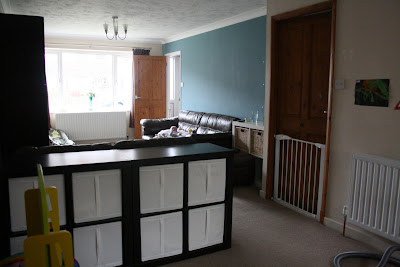 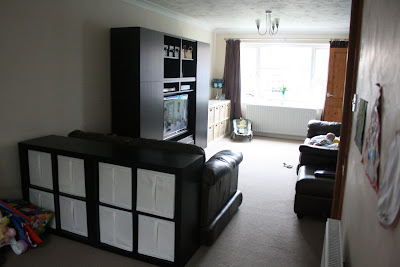 We're keeping all the furniture, so it's dark black/brown and white with rattan bits in places. The curtains are the same pattern as the cushion in the first photo with all the samples. I want to have lots of white in there too to brighten it up - photo frames, ornaments, etc. I'm also on the lookout for a big mirror for the playroom end to bounce some light around that darker area. I'm going to do a few little things here and there to try to bring the two sections of the room together, so it looks like two halves of the same room, rather than two unconnected spaces.

This arrangement of furniture might change too. I only just moved the small sofa there yesterday and I'm not so sure about it. If we had enough money I'd want to buy a new modular sofa to replace the two separate ones we've got.

And, we've got a Technician coming from IKEA to look at the big unit cause we've had a couple of issues with it. Sob! The doors keep dragging down and there's some tape stuff hanging off the front of the shelving. I'm so sad, cause we love our massive unit! Hopefully, the Tech will fix it.
Posted by Sarah Nello at 15:20